Athletic Scholarships for Women in College

The UCLA Bruins captured a national championship in women’s volleyball in 2011. The school is known for its stellar athletic programs and challenging academics. High school women who are interested in a volleyball scholarship from UCLA should provide statistics, video and scouting reports to prove their all-star abilities. UCLA only recruits the best of the best in women’s volleyball, so women should also make sure that they do very well in the classroom to boost their chances of successful recruitment. Only the elite players on the volleyball team receive scholarships, but the scholarships generally cover the full cost of tuition.

There are several ways to boost the chances of being awarded a volleyball scholarship from UCLA. The school has certain criteria that should be met in order to be recruited. These criteria include:

Interest in an athletic scholarship to UCLA should be shown early in high school. Scholarship opportunities are very limited, so the school prefers to know which students are most deserving of a scholarship as early as possible. More information about women’s volleyball can be found on UCLA’s athletic site.

Stanford won their first national title in women’s soccer in 2011. The school has become increasingly more notable for its athletic programs in recent years, and the school is also known for its outstanding academic programs. The first point of focus for women trying to gain acceptance into Stanford will be academics, because the school accepts less than 10 percent of applicants. Creating an appealing recruiting video will boost chances of being accepted into the school and increase the odds of receiving an athletic scholarship. Additional tips for receiving an athletic scholarship at Stanford include:

Numerous camps are offered by Duke in order to recruit new players. The school lists camp dates on dukesoccerschool.com, which provide ample opportunity to be noticed by coaches of the team. Scholarships often cover majority of tuition cost because of the school’s Division I status.

In addition to school scholarships for women’s soccer, there are private organizations that offer women athletic scholarships and grants. For example, the HWSA offers certain women $1,000 scholarships. Applicants must have a GPA higher than a 2.5 and be graduating high school in order to be eligible.

Grand Valley State University is a great Division II women’s soccer school. Women who want to be recruited by Grand Valley State should fill out their recruitment form on the school’s athletics website. Information that will need to be provided will include: 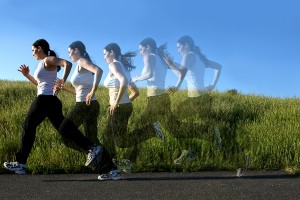 The SAMMY award is given to 25 high school seniors who demonstrate excellent athletic and academic abilities. Recipients of the award are give a $7,500 athletic scholarship for the school of their choice. The SAMMY awards are great for women track athletes who are seeking significant athletic scholarships for college. Applicants have to submit a short writing prompt to the organization to be considered for the award in addition to their academic and athletic records. Application is simple for the SAMMY awards, and women track athletes who place at the top of their state or country stand a great chance at being offered a SAMMY award.

Women who have run track for at least two seasons are eligible for the World Sport Chicago Scholarship. A scholarship may be worth up to $5,000 per year, and the award is renewable for the full four years of college. The award is available to high school juniors who live in the Chicago area, and potential student aspects that may be up for evaluation are:

Women’s basketball is one of the most popular women’s sports in college. Women can receive great athletic scholarships for basketball from high ranking schools, but being noticed by these schools requires a lot of effort on the athlete’s part. Here are some of the top women’s basketball programs and scholarships:

Baylor ranked first in the nation in women’s basketball during the 2012 season, and the Division I school enjoys a reputation for one of the finest basketball programs in the nation. As with many high ranking schools, scholarships will likely require registration with the NCAA clearinghouse no later than junior year of high school. Receiving a basketball scholarship from Baylor will likely also require playing for both varsity teams and AAU teams. Baylor regularly advances far into the NCAA basketball tournament, so only the country’s elite basketball players are likely to obtain a scholarship.

Campbellsville University offers it’s top basketball athletes scholarships of up to $14,500 per year. Usually only one women’s basketball player will be able to acquire this substantial scholarship, so competition is certainly high for the school. This athletic scholarship will cover most of the tuition and fees that Kentucky presents to its students, so receiving such a financial advantage is very helpful. Students must be able to maintain at least a 2.0 GPA to remain eligible for this athletic scholarship every year.

High school seniors in the Seattle area can be selected to win a $1,000 women’s swimming scholarship through the Davis Law Group Scholar Athlete Program. A woman must have maintained a GPA of 3.0 or higher and must prove that she has been a major part of her swimming program. The program works by nominating a student each week and holding a formal selection banquet at the end of the school year. Each student who is nominated receives a $100 award, and the student who is considered the most deserving will receive the prized $1,000 scholarship. Applications can be accessed online and are able to be submitted starting at the beginning of the school year.

Women interested in pursuing careers in swimming/diving may be eligible for the Zale Parry Scholarship. The scholarship amount is $2,000, and selection is based on financial need and academic/athletic commitment. Women who apply for this scholarship must be licensed divers and must be attending an accredited college. Women will be evaluated on their academic achievements more so than their swimming achievements for the scholarship award.

Auburn is one of the top ranked swimming schools in the nation. The school has a well-funded swimming program and may be able to offer a few select students full-ride scholarships. Auburn plays host for national swimming championships on occasion, and the school has some of the top swimming facilities in the nation. Being recruited by Auburn requires a combination of exceptional athletic skill, impressive SAT scores and a great academic record. Women interested in joining Auburn’s swimming team will need to contact coaches and join competitive swimming clubs in order to be awarded a scholarship by the school’s program. Since swimming scholarships are difficult to find, women will need to be among the elite swimmers in their area in order to be considered for any type of scholarship.

Tennis is rapidly increasing in popularity, so competition among students for scholarships is increasing as well. Tennis programs often place emphasis on hard work and academic success. Women who would like to be recruited by a tennis program at a highly ranked school will likely need to discuss their interest with college coaches and ask their high school coaches for letters of recommendation. Here are some of the top schools to consider for a tennis program or potential scholarship:

Florida placed second in the national rankings in 2011 for women’s tennis. Florida is well known for their dominant athletic programs that consistently win national championships. While Florida is an excellent school for any prospective athlete, the school has a very competitive scholarship selection process that makes a full-ride scholarship difficult to acquire. However, since women’s tennis is a head count sport, women are only given full-ride scholarships. Numerous students compete for athletic scholarships at Florida every year, so solid recruitment profiles must be forged in order to be noticed. Women who have great skill can have their coaches submit game videos and statistics to Florida in order to gain attention from the school. Some additional tips for being noticed by Florida include:

A tennis scholarship from the University of Florida will require hard work both on and off the court. Women should provide information that suggests that they can succeed while handling heavy workloads with their applications. Registration with the NCAA clearinghouse should also be done before junior year of high school in order to obtain a tennis scholarship from Florida.

Women tennis players may submit a 1,000 word essay describing their major and information regarding their academic and professional experience for the Bev Granger Memorial Scholarship. Applicants should also discuss how they plan to experience athletics in college. Award amounts may vary, so students will not consistently win the same scholarship amounts.

Golf scholarships are often offered primarily on the basis of interest and academic abilities rather than elite skill. Students need to prove that they are interested in playing golf in college and show that they have experience playing for their high school or private clubs. Golf scholarships may also place more emphasis on financial need over other women’s sports. There may not be many golf scholarships available from schools to women, but competition for those scholarships is much lower than competition for other sports. Many private organizations and schools offer scholarships to avid women golfers.

The WSCGA Foundation offers numerous scholarships to women golfers. Scholarship opportunities available from the organization include:

The NCPGA gives two golfers awards of $2,400 each year. The students must have participated in the NCPGA junior program in order to be eligible. Participation in the program can allow women golfers to gain experience and skills in golf before college. The association also provides many golf clinics and allows members to participate in select tournaments. The $2,400 scholarships awarded by the NCPGA are awarded to the students with the best athletic and academic abilities.

Burkhart Center scholarships are awarded more on the basis of academics than athletic abilities. However, women golfers can earn scholarships of up to $4,000 from the program. Scholarships are usually awarded to women golfers who have interest in pursuing careers in autism research and education. The Burkhart Center scholarship can allow women golfers to focus substantially on their academics over athletics. Applications can be submitted online and will be awarded to students who demonstrate financial need, academic and athletic achievement and interest in select careers.

Female athletes should spend a lot of time finding schools that have competitive programs that are willing to accept them for their sports teams. Academics should never be overlooked while building a good record for colleges, so be sure to score well on SATs and take challenging classes in high school. If athletic achievement is combined with academic achievement, schools are much more likely to take notice and offer athletic scholarships. Women athletes should apply to both Division I and Division II schools to increase the chances of receiving athletic scholarship offers. In addition, searches should be performed to find private organizations that offer scholarships for select sports.